The Docker version Pro is not latest deploy

I install the version pro of seafile in Ubunti with Docker , the instalaltion is all ok, but the version is older. 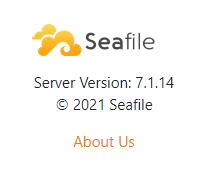 The last version is 8.0.3 please is posible solved this issue?

Unfortunately, the (Docker) Pro version is currently neglected, currently YOU can only build yourself a new container with the Pro version. Why this is not included in the normal build process is beyond me.

The whole situation with Pro in Docker is so bizarre… Not only with recent version 8 - this started way before that.
I have been building my own Pro images for version 7, as the official images were always late. Years ago I have offered my help with building the Pro images to the team, as I wanted to help them to speed up the pro releases. Got usual response:

chirping…
Some time ago I have started to work on version 8. Everything was ok, until this has hit me: Upgrade from 7.1.17 to 8.0.3 issue
And the same help has been offered (as usual) from developers - None.
To be honest, this seams a little bit strange to treat paying customers like that.

Agreed. Would be nice to have a response to this from Seafile. I too would be more than happy to help compile proper builds for PRO. Even better would be if the Seafile team released what files are required for Seahub vs Seafile including WEBDAV so that each component could be split up into different containers as would be the ‘correct’ way to do with containers.

Failing that, it would be totally understandable and actually appreciated if the Seafile team would just drop support for Docker and state as such. I’m also a paying customer and its pretty frustrating to always be running an old version just because I chose to deploy via docker instead of a dedicated VM. Plus, no where is it ever stated that using older versions is a consequence of choosing a containerized deployment. At least be upfront about it and say “We do not maintain our docker versions on the same timetable as our non-containerized deployments and, as such, you will not be able to take advantage of the latest versions of Seafile.”

Just my two cents, it’s frustrating but I hope if enough people chime in we’ll at least get an explanation or even the dev-team reaching out and asking for help (financial or just time) as needed. As it stands, I know that personally I’m very strongly debating whether or not to pay for a license renewal later this year because of this very issue plus the general lack of support via the forums.