Public folder with upload & download - where is the feature?

I have seen the following feature in the feature list / roadmap, for which I am waiting years now:
https://cloud.seatable.io/dtable/external-links/a85d4221e41344c19566/?tid=hsCb&vid=0000&row-id=YPpxZ72aRCaqGvxuTVuxDQ

It is tagged with 8.0.0 but now I installed 8.0.5 and can still only find the option to create download or upload links, but not both with one link. Am I searching at the wrong place or is this feature still missing?
If it is still missing when will it be implemented?

I have a idea… , Today we can send share links for download and/or upload. But wouldn’t it be great if we could have the possibility to combine them… “Send collaboration links”, where user and guests with the URL can upload, download, delete and change files… Any thoughts?..

Thanks very much for the hint! Then I was at least looking at the right place, but for me it is still looking like this: 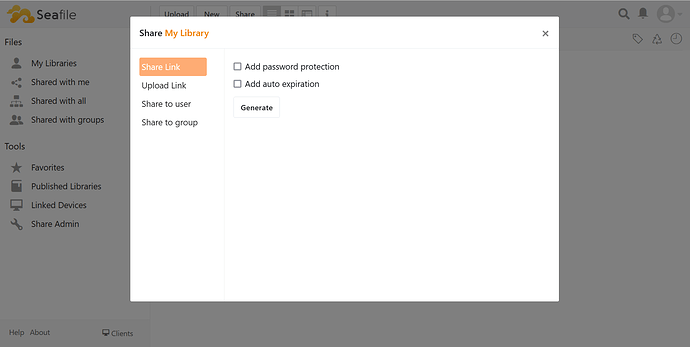 Is it only available in Pro Edition or do I have to change any settings?

Maybe a CSS issue? But then again @midi seems to use the default colours.

Permissions for share links are only available in the Pro Edition, that’s correct. Apologies for not mentioning it earlier.

While I appreciate Seafile CE being free at all; is this a joke? We are talking about allowing to create a link that allows upload and download and not more advanced sharing permission. This is an essential feature that one should be able to count on in the CE. This was requested back in 2014 and it took the team 7 years to implement and making it a Pro only feature.
They should rather improve code and stable defined software quality and sell more this way. Apart from other reasons this is the number one deal breaker for enterprises when I tell them about Seafile.
It’s the wrong direction to make everything useful Pro only trying to force people to buy pro.
The manual is a nightmare and there seems no intention from the team to change anything on that. What does the team expect from the community with all that is happening (or not) over the last couple of years.
As a community member that used to contribute a lot this makes me really sad. They even closed the contribution to the server manual, which basically excluded the community member from doing proper contributions. I am tired of trying to start some changes, since nothing really seems to change.
Anyways, other solutions are becoming more and more interesting, stable and might soon be able to replace Seafile.

I am really a big fan of Seafile since the first day I installed v2 in 2013. Since then I have deployed it from embedded PCs to bigger servers, CE as well as Pro Edition.

I am also totally fine with the feature split between CE and Pro (Private Server - Seafile), because CE offers most of the usefull functions to the users and contains all what you need for a usual single server setup. But for this feature I can really not understand what the (only) Pro part is here. Having a single link for uploading and downloading is especially usefull in private collecting and sharing files (e.g. photos). In business applications it is for me more questionable if this shall be allowed at all because of security concerns (there were already some dicussion concerning this point here in the forum).

But maybe it was also simply added to the permissions function for coding convinience because there were already other options and not because it is seen as pure Pro feature. And even if maybe the Seafile team can rethink their decision and make it available to everyone. @daniel.pan

Hello,
I completely approve this.
For me, it’s a common feature that it is incomprehensible it was not implemented years ago.

I also asked for this feature on January 2018 : Generate upload AND download link

But maybe it was also simply added to the permissions function for coding convinience because there were already other options and not because it is seen as pure Pro feature.

You are right. This is the reason why it is in the pro edition.

Thanks for the honest answer! Any chance that we get that function in future in the CE?